The other day I was editing a new video. It was a long and laborious process, as it was my first big video project for my new channel. However, I woke up the morning to a copyright claim on one of my videos. Now, not only was the video set to “Private” and not “Public” but I only uploaded it a few hours ago. The company “Columbia” must’ve had an auto audio program that sought out matches to its copyrighted material. 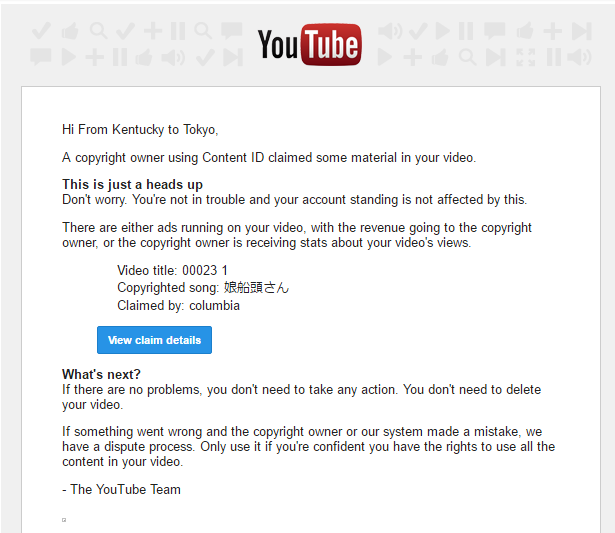 I wouldn’t have a problem with this except that, once again, the video was set to “Private” because I intended to slim it down and overlap it with free music from YouTube’s (quite awful) free and public domain music. However, with the copyright claim in place, it limits the viewership out of three countries and won’t allow me to monetize the video even if I added it into a longer version without the song. I don’t make money from YouTube at all, I’m only doing this as a new hobby and for exposure for my blog.

However, I found this claim extremely unfair and unjust. Not only are companies apparently now allowed to go onto your private videos and claim content, they can block you from getting money until your claim is finished. What’s worse, there are zero consequences for them putting this claim down on me. They will stay in good standing no matter what, whereas I’m going to have to fight to get it removed and probably continue to fight if their autobot decides to hit me again.

I clicked on the link and of course, it’s a click and fill out form. There were drop down options to dispute the claim and I chose the “Fair Use” option. From there I was sent to another form where I was told to “explain briefly” why I was disputing the claim.

Here’s what I wrote:

“To whom it may concern,
The music played in this video is playing in the background, it will be used for all of a few seconds in the finalized video I will be making. I believe then that my video fall under the same idea as the Lenz v. Universal Music Corp. (aka the “dancing baby” case), in that the music isn’t a live recording, nor is it being used as an exact copy. The “amount and sustainability” clause in fair use alone should allow for this slip to be considered within the realm of legally sound. Please remove this copyright claim, as my channel is an international channel and this claim would prevent my video from being seen in three countries. Thank you for your time.”

If you weren’t aware of the “Lenz v. Universal Music Corp.” case, basically a mother video tapped her baby dancing to Prince’s “Let’s Go Crazy.” It was cute and adorable, and Universal decided to slap a take down notice, because they’re a heartless corporation and that’s what they do for fun. Lenz sued, and Universal was told to shove their take down notice where the sun don’t shine because they needed to consider fair use when making claims. If someone rips a piece of music and sells it as a copy, that’s copyright infringement. If it’s background, low quality, and not even the full song, that’s a fair use claim right there.

Also, when I refer to “amount and sustainability” within fair use, I mean that the clip I’m going to use is short, like really short, and it’s not even going to USE THE SONG. I can’t stress this enough, the song won’t be in the finalized version. Regardless, even if I was going to use it, the amount of time the song is being used would be less that 10% of the original, which should fall under the fair use guidelines.

After I put in the e-signature of my full name, I was then directed to a very scary next stage. YouTube has a second part automatically added into my statement that also doesn’t sit well with me.

I have a good faith belief that the claim(s) described above have been made in error, and that I have the right(s) necessary to use the contents of my video for the reasons I have stated. I have not knowingly made any false statements, nor am I intentionally abusing this dispute process in order to interfere with the rights of others. I understand that filing fraudulent disputes may result in termination of my YouTube account. I understand that my video will be viewable by the claimant(s) so that they can review my dispute.

In other words, I’m going up against a company, and if they decide that I’m in the wrong here then I could lose my channel. What does that mean? Well, I guess that means I’ll have to just go out and learn to code videos into my blog, or alternatively use Facebook’s video system and then post to WordPress instead. I really enjoy vlogging, like way more than I thought I would. It’s fun, it’s challenging, and something about it makes me want to go out and try new things or look at the world around me with different eyes. I like it, basically, so I’m going to keep trying to dispute and if I lose, I’ll find a way to keep doing the vlogging thing without YouTube.

Still, the fact that I’m even going through all this trouble? And that I know for a fact that many people would just let it slide, and at the beginning I put up a video saying I wouldn’t fight these claims. I didn’t realize at the time how infuriating it would feel that after all the time, effort, traveling, editing, and so on, to get hit with a truly baseless claim. But now I know, and now I’m going to fight.